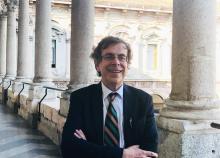 Since 1994, a full professor of Aesthetics and Aesthetics of Objects at the University of Milan, then from 2004 to 2010 Professor Franzini was Dean of the Faculty of Letters and Philosophy after having been President of the degree programme in Communication Sciences.

From 2005 to 2010, he also chaired the Conference of Deans of the Faculty of Letters and Philosophy and from 2011, for just over a year, he was Vice-Rector of Programming and didactic services.

Since March 2015 he has been President of the Italian Society of Aesthetics (SIE), and from October 2015 he is a member of the Academic Senate of the University of Milan. He is a member of the Scientific Committee at the Collegio San Carlo in Modena, of the International Centre for Aesthetic Studies, of the "Corrente" Foundation, of the Governing Council of the "Luzzatto Foundation", of the Lombard Institute of Sciences, Literature & Arts, and also a member of the jury for the Literary Award "Bagutta”.

Role and Functions of the Rector

The Rector is the institutional and legal representative of the University with the functions of direction, initiative and coordination of scientific and educational activities, and is responsible for pursuing the aims of the university according to quality criteria and in compliance with the principles of effectiveness, efficiency, transparency and merit promotion.

A high-profile figure with significant managerial experience within the university and/or research sectors, the Rector is elected from the leading professors in service at Italian universities. He is appointed by a decree from the Ministry of Education, University and of Research, and holds a non-renewable term of office lasting six years.

The Functions of the Rector

The Rector’s functions are stated in Article 25 of the University Statute.